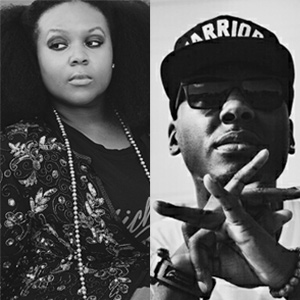 “Dope Dealer 2” picks up where the first left off, more soul, more bass, better quality. Rome aims to make the sound bigger than the last and still has his eye on the goal at hand, gain fans with great music, and greater performances. His lead single, “Master P” set the tone. Channeling his inner no limit. An ode to the No limit colonel with a current feel for the street.

With a voice that embodies pure passion and soul, Theresa Payne is definitely a star in her own right. Born and raised in St. Louis, MO, Payne has garnered fans from all over. Fans who undoubtedly attest her ability to contrast harmonious wails with a distinct angelic tone, all while arousing the music lover’s ear. Once dubbed a “Soulful Siren”, it’s been said that her voice has a way of playfully bounding between gentle enough to raise the hairs on the back of your neck and powerful enough to make you grip your glass.

No stranger to success, Payne has gained numerous achievements ranging from being named “Best R&B/Soul Artist” in a popular voter-based award contest for St. Louis’ music scene all the way to facing megastars Adam Levine, Usher, Shakira, and Blake Shelton on the stage of NBC’s The Voice for their sixth season. Her talent has also gained her opportunities to open for several of today’s most successful Soul artists such as Jill Scott and Eric Roberson.

Having released a few singles and two projects of her own, 2009’s “Go Fight Win” and 2011’s “The Moment”, Payne also finds herself a requested featured artist and writer by various artists across genres. Her latest offering, “Get My Heart Back”, is believed to reflect Payne’s undeniable talent and to be her best work to date, as expressed by Payne herself. Teaming up with equally talented producer Trifeckta, who himself has both national and international acclaim, “Get My Heart Back” is the result of pairing Payne’s honest lyrics with Trifeckta’s cosmic symphonies. A captivating entree of music that journals the path of what it is to grieve in love and yet find relief, the nine song EP is far from un-relatable.

Credited as a one woman army that is ready to take on the entertainment world one tune at a time, Theresa Payne is continuing her plight to reach the masses through her song.