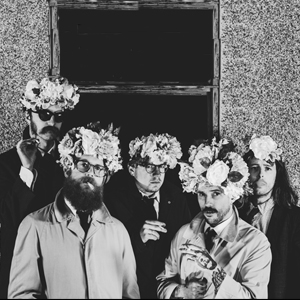 IDLES with “Joy as an Act of Resistance” is an attempt to be vulnerable to their audience, to encourage vulnerability; a mere brave naked smile in this messed up new world.

They have stripped back the songs and the lyrics to their bare flesh to allow each other to breathe and to celebrate our differences and act as an ode to communities and the individuals that forge them because without our community, we’d be nothing.

Bambara is a Brooklyn-via-Georgia based noise/punk band with a dark, Western slant. The trio consisting of twin brothers Reid and Blaze Bateh and William Brookshire formed in Athens,GA in 2009. They moved to a basement apartment in Brooklyn shortly after where they recorded and released their debut LP Dreamviolence (2013), noise collage EP Night Chimes (2014), and apocalyptic sophomore LP Swarm (2016). The acclaim from the releases led to tours supporting A Place to Bury Strangers, Metz, Girl Band, Liars, and Algiers. Now in 2018, Bambara has released their third LP Shadow on Everything. The album represents a decisive step forward for the trio. Bambara have always been adept students of noise and post-punk, mining the work of bands like Swans and The Birthday Party to construct what NPR called their “beautifully dynamic nightmares.” But with Shadow on Everything they’ve transcended their early influences to produce a Western Gothic concept album that sounds as big as the desert sky looming over its characters’ lives.

Bambara now performs as a 5-piece allowing Reid to stagger around stage free of instruments. This change has added to their pummeling and unpredictable live shows making them one of NYC’s most sought-after acts.