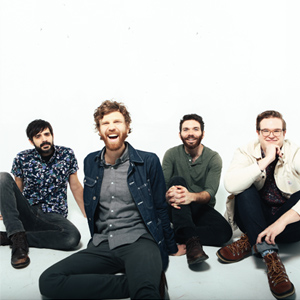 Turning on the radio, computer, or television can seem like a gamble, at best. Each new tuning offers a deluge of anxieties to greet us. In the face of this 21st century tumult, Humming House is on a quest. They do not want to wish away the pain and fear all too real in our lives, but to put those elements in conversation with the elements that sustain us: hope, partnership, even joy. And so, their newest album begins with Tam’s unmistakable voice intoning, “I want to be your companion.” It’s an appropriate beginning for a band who has built itself on complex musicianship and careful collaboration. They know the value of hard work and compromise. Their music is evidence of the thrill of creativity.

Humming House is Justin Wade Tam, Bobby Chase, Joshua Wolak, and Benjamin Jones. The band formed organically out of jam sessions that Tam held in his living room in East Nashville—evidence that some of the best projects come from spontaneous collaboration and the subsequent seeing it through. Now, three albums and six years later, Humming House continues to embody what is best about the Nashville each transplant chooses to call home.

What Humming House does so well is paint sonic landscapes that are at once compelling and honest, even in the most rollicking of songs. Revelries, Humming House’s second full-length album released in 2015, was largely influenced by the band’s history of touring. Its songs revealed the power and revelations that come from travel. Companion, to be released by Soundly on the 6th of October 2017, continues to pursue that which transforms. In part, it is still movement, movement that comes easily to the body as well as movement driven by the unease we daily brush up against. What’s most powerful about Humming House is their ability to be present with you, to take those moments in life that seem mundane and shift the lens so that they are rendered extraordinary. Theirs is a music of presence.

Humming House maintains that sense of intimacy that derives from making music with friends altogether in the same room. It is fun combined with substance. With Tam’s sincerity, Jones’ groove, and Chase and Wolak’s charm, their live shows extend the invitation to participate. As Dustin Ogdin observes in No Depression, “Humming House exudes restraint and a wily intelligence. They never pander to their crowd, but do respect them. They also seem to understand that the best music comes from an exchange between artist and audience rather than simply one giving and the other receiving.”