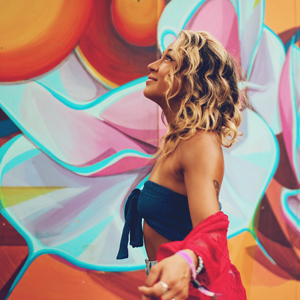 Hirie — the frontwoman of the exhilarating reggae band HIRIE — grew up a global citizen. Her father worked for the United Nations and she was born in the Philippines, spent years in Italy, before her family settled in Hawaii, which became her spiritual home.

San Diego’s seven-piece band HIRIE is ready to offer a global spiritual uplift. Melding the balmy island touches of its singer’s beloved home — as symbolized by its moniker’s first letter, a “H” for “Hawaii,” with that feeling of irie , the award-winning group offers a soundtrack of hope. Now, with its masterful most recent album, Wandering Soul , brimming with invigorating female-fronted shamanistic reggae an oasis of positivity is just an album away.

Wandering Soul’s lush construct reflects this depth. The songs feature chord sequences that have a sophisticated, tension and release accessibility. The musicianship is high-level restraint, showcasing that point of mature virtuosity where laying back implies instrumental prowess. The album’s trippy production — the bulk of it courtesy of Danny Kalb (Beck, Ben Harper, Sia) — replete with adventurous textured passages, heady dub segues, and subtle psychedelic flourishes, make it a rare headphone experience for a pop oriented record.

The album opens with the smoldering and ambitious title track — a sonic journey through heartfelt longing, and heady dub passages. The militant “Renegade” features Nahko Bear of Nahko and Medicine For The People and boasts stately horns, simmering grooves, and call-to-arms individuality against the massification of culture. The personal “Melody of a Broken Heart” and “You Won’t Be Alone” shine a light on personal domestic struggles. “I wrote ‘You Won’t Be Alone’ for my daughter with the hopes that she understands my life when she hears me on the radio. I hope she understands how much I love her and how I can be a role model by showing her she can be anything she wants,” Hirie confides. The sleek futuristic electronic textures of “Boom Fire” represents HIRIE’s party vibe and exudes vivaciousness of in the moment HIRIE living.

Hirie is currently working on her third full length album due out in 2019.

Reflecting on the power of HIRIE, Hirie shares this story: “I met a fan who was suffering from six tumors. He shared with me ‘Your music is the reason I get out of bed, you’re my medicine.’ That drives me to push this movement forward to share conscious music. I feel a responsibility and a duty to share a positive message.”