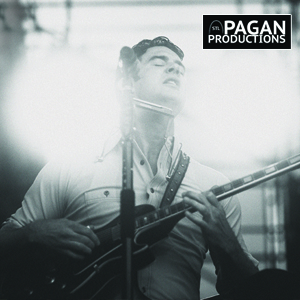 “When you get the spark, you got to ride that energy,” says G. Love, and that spark certainly ignites on his 10th studio full-length Love Saves The Day. He calls the new release “the fullest realization of the hip-hop blues” that he first pioneered with Special Sauce in the early ‘90s. The album, due out October 30 on Brushfire Records, not only features G. Love’s long-term Special Sauce rhythm section – upright bassist James “Jimi Jazz” Prescott, and drummer Jeffrey “The Houseman” Clemens – but also prominent guest performers including Los Lobos guitarist David Hidalgo, Lucinda Williams, Citizen Cope, Ozomatli, DJ Logic, Money Mark, Zach Gill and Adam Topol.

To create their down and dirty “trashcan blues” sound, G. Love and Special Sauce returned to Brushfire Records’ Solar Powered Plastic Plant in Los Angeles. The band was excited to re-team with Sugar engineer and producer Robert Carranza (Jack Johnson, Beastie Boys, Mars Volta). They recorded live with few edits to capture the immediacy of the music: G. Love making his guitar snarl and his harmonica moan, bassist Prescott bringing nimble funk to the bottom end and Clemens’ drum work crackling with power. “The music,” G. Love enthuses, “jumped off the tape.”