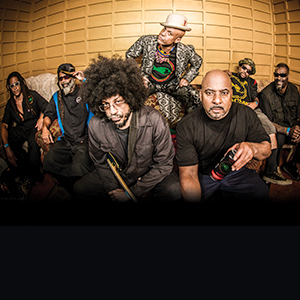 FISHBONE “THE RETURN OF THE MONKEY” TOUR

Celebrating 25+ groundbreaking years, FISHBONE has been trailblazing their way through the history of American Ska, Funk, Punk, Rock Fusion and (so-called) Black Rock since starting their professional career in Los Angeles’ burgeoning, Alternative Rock music scene of the mid-1980s. Their sound has often been imitated, but never duplicated. They have toured worldwide with such bands as the Beastie Boys, Red Hot Chili Peppers, The Roots, Les Claypool/Primus, Fela Kuti, George Clinton, The Dead Kennedys and many more. Angelo Moore’s ability to combine thought-provoking, humorous social commentary with FISHBONE’s frenzied, up-tempo music and frantic, euphorically entertaining stage show has cultivated their undisputed reputation as one of the best live acts in music history.

Composing, creating, recording, releasing and performing original music together for over two decades, mass critical appeal appears to be returning to the band, fueled by their critically acclaimed full-length feature documentary; Everyday Sunshine: The Story of Fishbone. Narrated by Laurence Fishburne, the film earned LA Weekly’s Critic’s Choice Award at the Los Angeles Film Fest in 2010, has been called “effortlessly Entertaining” (Variety), “Brilliant and Groundbreaking” (Pop Matters), and hailed as “more than a documentary about rock ‘n’ roll.  It’s a documentary about the American spirit and one that shows the life of one of its most influential creative forces.” (Encore Magazine). In addition, FISHBONE has been featured in a variety of national press recently including Rolling Stone, New York Times, Wall Street Journal, Los Angeles Times, MTV Hive, Spin Magazine, E! Entertainment, Rotten Tomatoes and more.