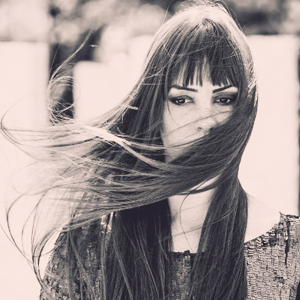 It isn’t unusual for artists to glean inspiration from emotional upheaval, transcending pain through a kind of mental osmosis, so that the turmoil in their lives provides the fuel for their artistic fire. Only some, however, lay bare the open nerves of their suffering, inviting the listener to experience raw emotion with them, in real time. By exposing vulnerabilities within themselves so fragile that their music itself somehow embodies their own personal discomfort, they create an auditory experience verging on total catharsis, for artist and audience alike. Emma Ruth Rundle is just such a musician. Her second solo album, Marked for Death, mines feelings of loss, defeat, heartache and self-destructiveness to emerge with the most honest and compelling accomplishment of an already prolific career.

A more adventurous production than 2014’s solo debut Some Heavy Ocean, the eight compositions on Marked for Death, helmed by engineer/co-producer Sonny DiPerri, emphasize dynamics and vocal melodies, variable tuning, and a dense layering and texturing of guitars. Nevertheless, fear and self-doubt linger in the shadows of Rundle’s mind, providing an incessant counterpoint to her ambitious talent and sultry, albeit de-emphasized, allure. As she explains, “There is intentionally nothing to hide behind here, but at the same time I’m terrified of revealing myself.” Clarifying this she continues, “The subject matter is largely about being defeated and shrunken into the base human themes of love and loss. It’s a far cry from high art. It’s very much from the dirt.” Exemplified by the candid, unglamorous cover portrait, the album makes a persuasive argument for its creator’s utter helplessness in the shadow of defeat. And though a potent dose of dark, hypnotic rock every bit as satisfying as her work with Marriages and Red Sparowes, Marked for Death’s most resonant element is Rundle herself, settling-in to her role as singer/songwriter. Her rich voice, alternately jostled and cradled by the sounds conjured from her guitar, feels more present, perhaps even more deliberate, than ever before. Written over the space of a few months holed-up at The Farm, Sargent House’s desert outpost/recording studio outside Los Angeles, the songs on Marked for Death reflect the investigative, occasionally improvised nature of writing and, eventually, recording at the site. The studio’s dirty electricity necessitated going direct for most of the guitar tracks. “Because of the direct input set up,” Rundle explains, “I had a lot more time to get very textural with the electric guitars, so there are many layers.” With unlimited time and space, discovery itself became part of the songwriting process.

Complemented by the timeless, cinematic lens of the album’s production, Marked for Death finds Emma Ruth Rundle emerging as a performer of naked intensity. She shapes vast, evocative landscapes of sound, combining them with lyrics of devastating candor. Self-determination and resiliency, disguised in this case as coming to terms with overwhelming defeat, are key aspects of her personality. Transforming pain into works of great beauty makes her the compelling artist she is.