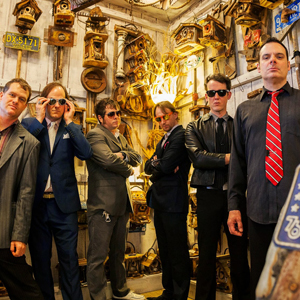 Eternal life can seem like an eternity. Ask any vampire. The continuous march of sun ups, sun downs, transformations of form, seductions, cape fittings & exsanguinations. Eventually it all just becomes an endless, tired routine. It all seems so exciting & so sexy to those of us who operate knowing we have limited time. But ask any vampire about the downside of eternal life, & you won’t be surprised to hear tales of binge eating garlic bread just to feel the hurt, or of the occasional dangling of a wooden stake just over the center of the rib cage. Electric Six knows all about eternal life. Electric Six has been around forever & it can never die. That’s lovely, but it’s also very tiring. Fresh Blood For Tired Vampyres is the new release by Electric Six on Metropolis Records. One listen & you will immediately understand that the sexiest vampires are urban vampires. Where E6 has dabbled in dance, hip-hop & R&B in the past, Fresh Blood is the whole enchilada. It’s thirteen songs designed to make the listener interested in smooth & nasty fuckin’, the way they do it in the city. From the Grandmaster Flash-inspired Number Of The Beast to the super smooth tour of the NYC outer boroughs Mood Is Improving, the listener finds himself immediately deposited into an urban drop zone with hustlas & dickblockas coming from behind every corner. The radio-ready pop hits I’ll Be In Touch & Dance With Dark Forces are the tracks that get the listener off the street & into the club. & it would not be an Electric Six album without an epic closer, that being the beautiful & haunting Spacewalkin’, the ballad that assures the listener that the vampire has now fed & will live a thousand more years, albeit in outer space. Electric Six changes more frequently than change itself, but ultimately this just means they’re never gonna put out the same album twice. Fresh Blood for Tired Vampires is poppy & smooth, nasty & raw…& oh so life affirming, especially if you are undead.