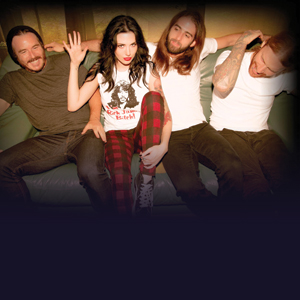 “This guy was telling me all this stuff that no one else could possibly know,” says Dorothy Martin, the singer and namesake of Los Angeles rock quartet Dorothy. “The theme from The Twilight Zone was playing in my head. It was a ritual cleaning, where this medicine man from Guadalajara spit all over me and blew smoke in my face. It was crazy. Then, we went and climbed a pyramid. When we got to the top there were all these butterflies everywhere. It felt like a dream. But, the weirdest part is that I had written the song before this happened.”

As Dorothy Martin talks about her favorite song (“Medicine Man”) from her band’s forthcoming debut on Jay-Z’s Roc Nation label, you begin to realize the precise reason why her music is so bewitching.

No, it’s not because she might be more of a shaman than that mystic she met in Mexico City. It’s because despite drawing from a familiar musical tradition—they are a rock band after all—Dorothy’s music is rendered anew by this front-woman’s singular vision. All of it is channeled through her. There is no one quite like her. So it follows, there has been nothing quite like this band before now.