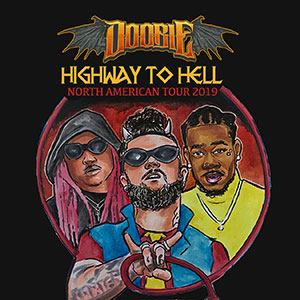 Doobie is a rising rap star who’s bursted on the national scene with his recent hit When The Drugs Don’t Work, amassing over 27 million views. Melding together influences from rock and hip hop, Doobie is an eclectic star in the making.

Just like his music, Doobie has always stuck out. His early rock influences can be attributed to Alice In Chains, Nirvana and Metallica alongside a constant stream of hip hop. With Kurt Cobain was one of his self-professed idols, Doobie’s rap echoes a grunge element reminiscent of the 90s rock scene.

Today’s hip hop scene is the perfect climate for an artist like Doobie to emerge – where rap stars have replaced the rock stars of the past. Along with being an extremely talented rapper and singer, the Ohio native also produces the majority of his own music. Moving against the grain, Doobie avoids piling up the collabs and instead keeps his work extremely personal and reflective of his life struggles, including his battle with drug addiction from a young age. Shy and quiet outside of his music, Doobie chooses to speak through his songs.