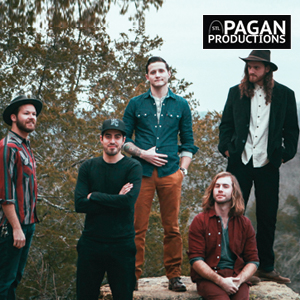 On The Delta Saints’ new album, Bones, their first for Loud & Proud Records, the Nashville-based band have stripped their roots/blues sound down to its essence, having rearranged the elements into something uniquely their own. Steeped in rock ‘n’ roll’s building blocks – country, R&B, soul and gospel – The Delta Saints’ second full-length effort explores influences like Jack White, The Black Keys, My Morning Jacket, Band of Horses and Led Zeppelin. Producer/engineer/mixer and Third Man Records alum, Eddie Spear [Jack White, Arctic Monkeys, Neil Young] provided a ghostly, psychedelic atmosphere at Nashville’s Sputnik Sound studios, yielding a sound unlike anything they have created before.

“We got to the point where what we were recording and playing had veered from what we were listening to and loving on our turntables, which can lead to discontent,” said Louisiana-born singer/lyricist Ben Ringel, who co-founded the band almost eight years ago with fellow Belmont University student, Kansas native bassist David Supica. Soon after, they were joined by Tennessee-bred guitarist Dylan Fitch and later, after a health scare with the band’s former harmonica player, enlisted Louisville resident and keyboardist, Nate Kremer, who was added to the lineup only two weeks before a two month long European tour.