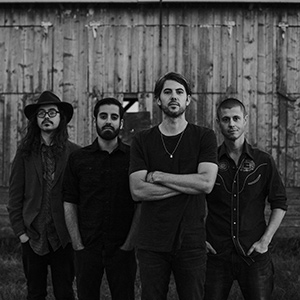 The Illinois native knows his way around a captivating story and a catchy melody, and for the past 15 years he’s been recording albums and putting on at least 125 shows a year, sharing the stage with artists like Martin Sexton, Andrew Combs, and Nikka Costa. From 2008-14, he played with his band the Humadors, and their 2011 release, The Love Show, hit the Roots Rock chart’s Top 50.

“I was truly happy with it,” Hubbard says. “I felt like I finally made the record I had always wanted to, and I wasn’t in any hurry to do another one.” But he had a lot more to say, and

the songs on Attention cover everything from lost love and suicide, to brokenness, anger, hatred, and—a running theme in all Hubbard’s work—the redeeming power of love.

Hubbard—the youngest of three boys—credits his brother D.J. with inspiring him to write. “My older brother started writing songs, and he was really good. Seeing his talent made me believe I might have it in me too.” he says. At age nine, Hubbard’s other brother, Erik, died from brain cancer when he was just twelve. By 15, Dan discovered guitar as an outlet. “lyrics started coming pretty effortlessly as I learned to play guitar,” he says. “The feeling I experienced when I finished a song…I wanted to keep feeling that.” After graduating from Illinois State University, Hubbard knew he wanted to pursue music, and he’s been honing his craft ever since.

Like his earlier work, Attention draws its subjects from Hubbard’s life. “I tend to be a wallflower,” he says. “I just observe, and life never stops giving me material. The subject matter has become more intense with this album. I’m trying to meet people in their deepest, most vulnerable places, and let them know that they’re not alone.” What haven’t changed are Hubbard’s vocals, which alternate between powerful rock and blues shouts to tender inflections. His notes soothe, pulling us into the warmth of the music before his lyrics burn their message on our hearts.

The 11-song collection opens quietly enough with the first verse of “Run Towards the River,” as Hubbard whispers urgently, “Count of three, move your feet, like you never have in your life/One last look at the years he took, now there’s no time left for goodbye/Take a deep breath, watch the trees blow, hand on the handle, it’s time to go.” Barely audible, the lyrics quickly blossom into a warning—“watch for the wicked”—and encouragement—“there will be love waiting for you”—in a tune fueled by propulsive guitars and drums that mimic the desperate need to flee. “This song looks at different abusive relationships, urging the victims to realize what’s happening to them—and to get out,” Hubbard says.

“Poison Words” illustrates Hubbard’s subtle genius by balancing swelling horn choruses with aching steel guitar, subtle gospel piano flourishes, and shimmering roots rock guitars. Hubbard says he wrote the song out of his frustration with the church. “I consider myself a Christian,” he says. “But there are aspects of it that I struggle with.” The song’s chorus repeats “poison words” almost like a prayer, calling into account the church’s treatment of the LGBTQ community.

“Scars” shares the anguish and fear that Hubbard’s family felt when they learned his brother Erik’s illness was terminal. “The day he died wasn’t the worst day,” Hubbard says. “It was the day we found out he was going to die.” “Scars” is the sparsest song on the album, with the tinkling of bells and a haunting steel guitar.

On the flipside, the funky “Ain’t No Fountain” dances around the bankruptcy of our dreams, while “Every Time I See Your Face” delivers a gospel-inflected jazz tune that celebrates the promise of love. It’s a “song about God disguised to sound like it’s about a significant other,” Hubbard says cheekily. Attention closes with “80,” a simple soul number that celebrates life, even in the face of the unknown: “80 years old/Into the unknown/Scared and alone/Still love rock-n-roll.”

Hubbard’s new album reminds us that he’s been here all along, writing powerful songs that touch our hearts and ask difficult questions about the world we live in. He challenges and reassures us at the same time, the hallmark of a great songwriter. “We’re all struggling. I get it because I’m in this, too,” he says. “I just want to make people reflect.”

When we pay Attention, Dan Hubbard gets us to smile, cry, and think deeply about our shared human experience.