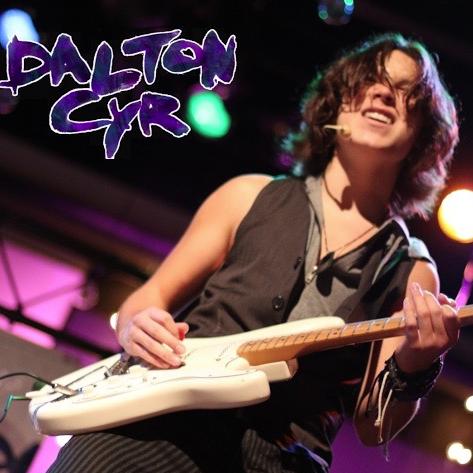 “Phenomenal musician who must be writing hooks in his sleep. Otherwise, how could he have written so many great songs…he’s the real deal!”
– Mark Sutherland, Radio Disney, CEO 200 Pier Studios

Dalton Cyr is a high energy teen singer/songwriter/musician who instantly captivates audiences with his powerful guitar, intense vocal delivery and lively stage show. His original music uniquely merges pop and rock with infectious hooks, and immediately grabs people’s attention getting them out of their seats.

Already a prolific songwriter, Dalton debuted his first EP at age 11, his first LP at 12, and is currently working on his next album which he began recording with multi-platinum music producer Paul Fox (10,000 Maniacs, REM, Rod Stewart, Ziggy Marley, Phish) and an all-star cast of musicians including Josh Freese (Sting, Guns-n-Roses, Nine Inch Nails, Devo, The Vandals, Dixie Chicks, etc.) and Aron Forbes (X-Factor band & Music Director for One Direction) in L.A.

In the spring of 2013, Dalton was selected by industry talent scouts as one of the twenty most promising songwriters in the world and chosen to participate in the 2013 International Prodigy workshop.

With fans in 149 countries around the world, Dalton has toured the East Coast, South and Midwest. Performing live regularly, he averages about 50 performances a year and has performed in front of audiences as large as 50,000. Dalton has worked fairs, festivals, amphitheaters, coliseums, and arenas including the main stage and as the featured artist.