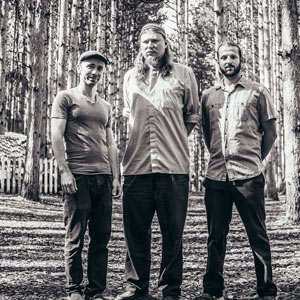 NYC trio Consider the Source defy easy description. If intergalactic beings of pure energy, after initiation into an order of whirling dervishes, built some kind of pan-dimensional booty-shaking engine, powered by psychedelics and abstract math, it’d probably just sound like a CTS tribute band. Drawing from progressive rock, fusion and jazz, with alien sounds soaked in Indian and Middle Eastern styles, CTS blends disparate parts into a striking, utterly original whole. Dubbed “Sci-Fi Middle Eastern Fusion”, the band’s music strikes a rare balance between cerebral and emotional, intellectual and primal. A relentless touring schedule has won the band a fervent following from California to Israel, with fans ranging from jam-band hippies and jazz cats to corpse-painted headbangers and prog geeks.

Formed in 2004, Consider the Source features Gabriel Marin on fretless double-neck guitar, bassist John Ferrara, and drummer/percussionist Jeff Mann. Called “the guiding light for his generation of six-stringers”, Marin channels the mystical fury of McLaughlin and Coltrane into wailing melodies, kaleidoscopic soundscapes and boneshaking riffs. With a background in classical musics both Eurpoean and Indian, and an instinct for avant-jazz and destructive metal, Marin’s hypnotic fusion of styles is ever unpredictable. Ferrara’s propulsive, percussive attack, equally suited to simple grooves and impossible chords, can ground the music or launch it into space. His madcap gumbo of slap bass, Indian rhythms, earthy minimalism and complex tapping constantly pushes into strange new worlds, whilst still dropping thick booty-clap beats. Underneath them lies Mann’s rolling thunder; dense rhythmic architecture built from pure swagger and bounce. Half double-bass prog-metal, half crackle-pop Buddy Rich swing, with African and Balkan swirls, Mann’s muscular, freewheeling polyrhythms are the engine fuel for Consider’s multiversal mischief. Even when not improvising, Consider’s music is always a conversation, a roiling stew of dynamic interplay. Each member of Consider the Source alternately leads and follows, spars and assists; in any single song, alliances are made and broken, bargains struck and divorces finalized.