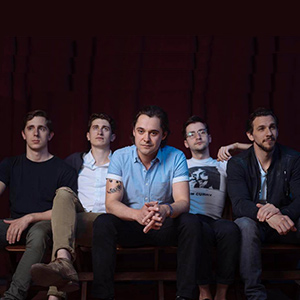 Cold Roses earned a fervent local fan base and a reputation as a powerful live act.  Despite the band’s lack of a mainstream record deal, Philadelphia’s legendary album-rock station WMMR jumped on board, naming Cold Roses Artist of the Month and giving airplay to songs from the band’s independently released indie album No Silence in the City.  Eventually, stations across the country were playing Cold Roses tracks as well.

While Escape to Anywhere demonstrates Cold Roses’ credentials as a world-class outfit, Clancy is quick to note the role that the band’s hometown has played in developing Cold Roses’ music and character.  “This band has definitely been shaped by where we’re from,” he states, adding, “Philly made us a working band.  In Philly, if you’re a band playing original material, you really have to bust your ass, and that was a big lesson for us.  All of the people in this band come from very different musical backgrounds, but we’re all from this area, and that common ground is a big part of the band’s foundation.

“Philly has an underdog quality, and it also has such a rich R&B and jazz heritage,” Clancy asserts.  “It’s a town with a lot of heart that doesn’t put up with bullshit, and it’s a working-class town with a strong work ethic.  It also has some of the toughest crowds in the country to win over. We’ve played to such a wide variety of people and found a way to connect with each one of them.”

The lessons learned on the band’s home turf proved invaluable during the making of Escape to Anywhere.  The band recorded the album – which marks the first release for indie label Recorded Records — at Los Angeles’ Cactus studio with veteran producers David J. Holman (who also engineered) and Roger Paglia.