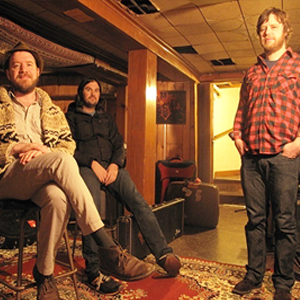 When self­taught spiritual artist Augustin Lesage (1876­-1954) spoke of his painting process he said,​“I never have any idea as to what I want to portray. I never have an overview of the entire work at any point of the execution. My guides tell me: ‘Do not try to understand what you’re doing.’ I surrender to their impulse.” This sentiment of surrendering is shared by ​The Cave Singers. Their writing is unfettered; their songs possess a quality of deliverance. Each track of their four album catalog compels movement, physical and emotional. It can manifest as the tapping of one’s foot, nod of the head or even a silent lifting of the heart. The Cave Singers’ melodic harmonies pull the body to the present, demanding our attention beyond all of the other noises of the world.

Banshee brings The Cave Singers back to their original 3 piece of vocalist / songwriter Peter Quirk, guitarist Derek Fudesco and drummer Marty Lunda. The album was recorded live in July of 2015 over 6 days with producer Randall Dunn. The record is warmly anchored in the members’ creative familiarity with one another. Yet there is a new thirst to Banshee, one that can be attributed to the combination of the band taking a year off to work on other projects­ Pete Quirk’s solo album and the Kodiak Deathbeds debut record ­ and their return to songwriting from distanced correspondence.

Lead vocalist Peter Quirk possesses a spiritual healing quality that rides within the tonal waves of his lyrics. Driving guitars, foot­tapping percussion, and Quirk’s powerful vocals make an intricate quilt that blankets the audience in comfort, aggressively communicating a gentle reminder: we are soft bodies trying to survive with one another. Fade Away highlights this, “With the sun on our back we will never get cold,​with the light in our eyes it’s alright to get old, whatever your story might say,​however,​it’s told,​let it go,​let it let go,​let it fade away.” The Cave Singers remind us that it takes a village. They remain approachable while retaining the complexity of writing skills possessed by folks who have dedicated their lives to music. Their appreciation of varied sounds, the writing process, and performing in every type of venue, house and festival possible allows them to connect with those they speak to. Their passion for their craft translates from their recordings and resonates through their performances. The Cave Singers are the people’s band.