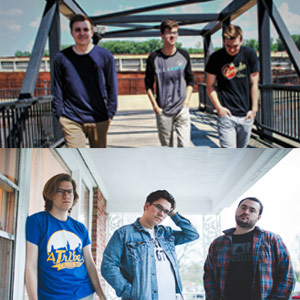 Casper consists of Patrick Wilson (vocals/guitar), Bennett Smallwood (bass), and Jack Kellett (drums). The band started over 2 years ago as three losers playing some of their favorite songs together. It didn’t take long for the band to begin writing its own music. After experimenting with early originals, the group looked to mature and form its own sound through new material. “Lost Transmission” is Casper’s debut studio EP. Recorded by engineer Zagk Gibbons at Gaslight Studio in St. Louis, the EP is representative of the past, present, and the future of the band. With vocals, guitars, bass, and drums being the only instruments used, the band looks to get as much out of each instrument as they can. “Lost Transmission” will be available worldwide on May 31, 2017.

Zach Sullentrup is a songwriter & nice boy from Missouri. When he isn’t writing songs for his band Tidal Volume, he’s probably writing songs for himself like the self-obsessed dweeb he is. “Former Failures: Least Flammable Garbage 2012-2015” is available now, & he really hopes you like it because quite frankly, he just can’t handle the rejection at the moment. His solo studio debut album “Debt Sounds” will be out on May 26. He recorded it with a full band known as Zach Sullentrup & His Terrible 20s. You’re probably going to hate it, but he will enjoy the attention regardless.