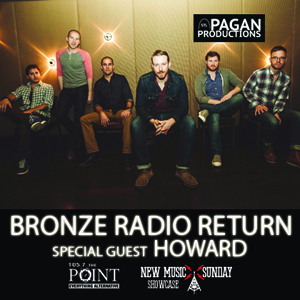 Odds are pretty good that you have already heard Bronze Radio Return, even if you may not realize it. Since 2008, the Hartford, CT six-piece has independently sold over 100,000 singles, racked up more than 26 million streams on Spotify, and, with songs such as “Further On” and “Shake, Shake, Shake,” they have impressively notched nearly 100 high-profile placements ranging from the 2014 film St. Vincent, to commercials for Nissan and Starbucks, to numerous television shows. Along the way, their hyper-charged and hypnotic stage presence has turned bystanders into believers at festivals including Bonnaroo, Lollapalooza, Hangout, and Firefly.

Their new album, Light Me Up [DigSin], is posed to skyrocket them even further. Armed with a sound that’s one part indie dance party and another part roots rock laced with a pop sensibility, the music of Bronze Radio Return is begging to be blared with the windows rolled down. These boys stand primed for impact in a big way.