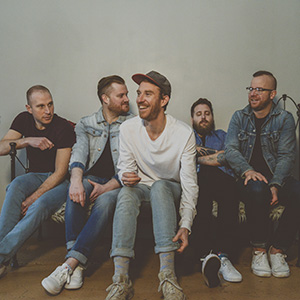 For nearly a decade, Hartford, Connecticut’s Bronze Radio Return has traveled the world, urging their listeners to dance and sing along. Their rousing, anthemic sound creates an undeniable upbeat atmosphere that’s one part dance party and another part roots-rock. If their name doesn’t ring a bell, odds are you know one of their acclaimed singles, leaving them affectionately dubbed “the band you’ve probably heard, but haven’t heard of.” Racking up more than 60 million streams on Spotify, and with songs such as “Light Me Up,” “Further On,” and “Shake, Shake, Shake,” they have impressively notched nearly 100 high-profile placements ranging from the 2014 film St. Vincent, to commercials for Nissan and Starbucks, to numerous television shows.
Along the way, their hyper-charged and hypnotic stage presence has turned bystanders into believers at festivals including Bonnaroo, Lollapalooza, Hangout, and Firefly, and gained international recognition with tours throughout Europe and China. Their last LP, 2016’s Light Me Up skyrocketed them to even further success. Regarded as “infectiously catchy and fun to listen to from the very first line of the title track all the way to the very end” (The Prelude Press), the music of Bronze Radio Return’s former album cemented that these boys stand primed for impact in a big way.Now, the five-piece Bronze Radio Return is gearing up to release a stream of new music, with their sound evolving more than ever and with their roots always firmly intact.
Holding true to their previous writing and recording process, like when they escaped to Texas and Oklahoma together during the production of Light Me Up, many of the songs came to be during lead singer Chris Henderson’s recent move to Oklahoma with little more than just an air mattress. Later, the guys came together at a ranch in Texas to record this exciting chapter of the band’s progression, both musically and personally.As the band articulates:”This latest collection of songs is a culmination of our many adventures together over the years. It’s a representation of an evolving creative process that changes with time and perspective. Who wants to read a book where every chapter is the same?
This chapter is a continuation of what we started when the band began and tells a story of where we are now. The throwback elements are still there, but we want listeners to breathe the fresh air of a sound they haven’t yet expected from us.” Their new 12-song album will be rolled out as a series of singles and EPs starting in the fall of 2018 before culminating in the release of the full body of work in 2019.