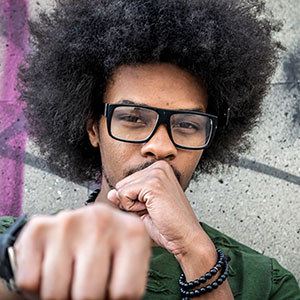 Bo’s passion for rap started at the age of twelve when he bought his first rap album, entitled “ Big Willie.” By Will Smith.

Intrigued by the way words could be melodically placed in music, Bo Dean started listening to and was influenced by some of Hip Hop and R&B’s greatest, such as Michael Jackson, Jay Z. Fabulous, Lil Wayne and DMX to name a few. Bo Dean honed his skills and by the time he reached middle school, he released his first mixtape that received rave reviews.

Coming from a lineage of scholars and educators, Bo continued his education at Harris Stowe State University. During his studies, he began to showcase his wordsmith with creative and versatile flows constantly expanding his fan base.

After receiving his degree in English Education, Bo followed his family’s legacy and became an educator. School teacher by day and emcee by night. Seriously concentrating his efforts on his music career, his fan base led him to open for numerous national acts, including MGK, DMX, Nipsey Hu$tle, Bone Thugz, Rakim and Rittz. Even shutting down stages in New York, Nashville, Chicago and at SXSW in Texas.

His 2014 project “Bovember 3 “A Beautiful Ugly” covered a wide range of subject matter and was proclaimed by his fans as one of the best projects to come out of St Louis and one of his best pieces of work to date. That project spawned the popular songs, Money and Chi Chi.

Bo Dean’s hard work and dedication got him nominated for three Slum Fest Awards In 2014. Artist of the Year, Album of the Year and Best Male Hip Hop Artist of the Year, winning the latter. He also led his team “Young Gunz” to victory in the Slum Fest Hip Hop Cypher Battle, and was listed as one of the best emcees in St. Louis by the River Front Times.

The buzz around this talented St. Louis rapper is building and influential music industry insiders including, Crooked I from Slaughterhouse, Freeway from Roc-A-Fella and Project Pat of Three 6 Mafia are just of few who are sitting up and taking notice.

Bo Dean is continuing on his road to success with his signature fro in tow. On July 4th 2016, Bo Dean released major project Fromerica, which he describes as the soundtrack to Black America as it stands currently. Witness to the focal point of international protest due to the killing of unarmed teenager Michael Brown in 2014 by a local police officer, a project of this intensity was bound to be created by the artist sooner or later.

Commenting on the now as it relates to the struggles of the Civil Rights era and Black Power Movement of the 1960s and 1970s, the instrumentation will make that connection as well with groovy beats and a touch of psychedelic funk reminiscent of the days of Curtis Mayfield. “I touch on a lot of things that’s going on right now that happened back then: police brutality, segregation, standing up for what you believe in, being proud to be black.” Bo Dean says of the long awaited project. “It’s just real old school, real soulful, it has an uplifting vibe to it.”

“Everything I experienced at the time inspired me to do this album,” says Dean, a St. Louis Public Schools teacher.

He feels it’s a must for any artist who witnessed Ferguson firsthand to put their experiences in their music.