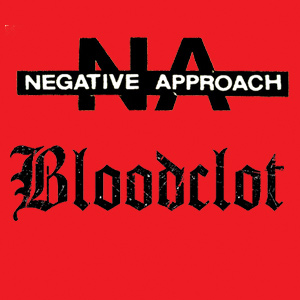 At its purest, there is little that can match the visceral thrill and empowering spirit of hardcore. As front-man of New York City hardcore kings Cro-Mags, this is something John Joseph knows very well, and with Up In Arms, he and his Bloodclot compatriots deliver a furious collection that hits hard on every level. “In this band we’re doing what each of us have always done: give it our all,” he states plainly. “We work hard, and we have a lot to say. Look around the planet – people are fed up with the corrupt ruling class. They destroy the planet and kill millions for profit, and the formula for our response is simple: Anger + applied knowledge = results. Don’t just bitch. Change it.”

Negative Approach is an American hardcore punk band, formed in Detroit, Michigan in 1981. The band is considered among of the pioneers of hardcore punk, particularly in the Midwest region.[1] Like most hardcore bands, Negative Approach was little known in its day outside of its hometown. It is now idolized in the Detroit rock underground and the punk subculture, considered to be one of the elite bands of the “old school” era, and continues to be influential

Negative Approach initially broke up in 1984 with singer John Brannon moving onto Laughing Hyenas, and later Easy Action, but the band has reformed as of 2006 and continues to tour sporadically