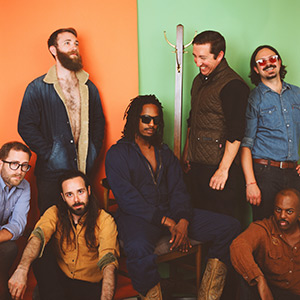 On their new album Backlash (out February 10), Black Joe Lewis & the Honeybears reclaim their original moniker and return to their much-celebrated take on classic soul and punked-up R&B. As Lewis explains, the band’s fourth full-length confronts the ugly reality of “dealing with the backlash from the things you’ve done in the past,” delivering a host of songs rooted in regret but steeped in a defiant spirit. Bombastic but nuanced, Backlash ultimately unfolds as an album both joyfully chaotic and intensely cathartic.

Recorded at Big Orange studios in the band’s hometown of Austin, TX, Backlash finds Black Joe Lewis joining forces with Grammy Award-winning producer Stuart Sikes (The White Stripes, Cat Power, Modest Mouse) and revisiting his most deep-seated influences. “I wanted to go for more of a soul/blues/rock-and-roll sound compared to the last one-the kind of stuff I was doing back in the day, but with the songwriting a little more evolved,” Lewis says. The band’s most stylistically adventurous work so far, Backlash expands their sound by bringing gritty guitar tones and Stax-styled horn sections to intricate, danceable arrangements inspired by the likes of Nile Rodgers.

Kaleidoscopic in mood and unrestrained in emotion, Backlash channels its restless energy into tracks like the infinitely catchy and groove-drenched “Sexual Tension,” the fed-up and fired-up “PTP,” and the fantastically unhinged “Freakin’ Out.” On “Lips of a Loser,” meanwhile, Black Joe Lewis lays down a beautifully devastating breakup ballad powered by sprawling guitar lines and cinematic swells of strings. “‘Lips of a Loser’ is my Isaac Hayes impersonation,” notes Lewis of his smoldering vocal performance on the album’s stunning centerpiece.

Elsewhere on Backlash, Black Joe Lewis addresses unrest on a broader scale: “Global” infuses howling vocals and heavy guitar riffs into a rowdy meditation on environmental destruction, while the chant-driven “Nature’s Natural” emerges as the album’s most striking and mournful moment. “That one’s about black-on-black crime, and also about police killing black dudes all the time,” says Lewis of the latter, pointing out that the song was written in the aftermath of Ferguson.

A Texas native, Lewis discovered his love for the blues soon after learning to play guitar his late teens. “I grew up on hip-hop and whatever my dad was listening to-Springsteen and Curtis Mayfield and Donny Hathaway-but once I picked up the guitar I started getting into the deep cuts,” Lewis recalls. Naming Lightnin’ Hopkins and Iggy Pop among his main inspirations, he formed Black Joe Lewis & the Honeybears in 2007 and released his major label debut Tell ‘Em What Your Name Is! (Lost Highway/Universal) the following year.

Known for their can’t-miss, full-throttle live show, Black Joe Lewis & the Honeybears are now gearing up for a 2017 North American headline tour, the band’s first comprehensive run since 2013.