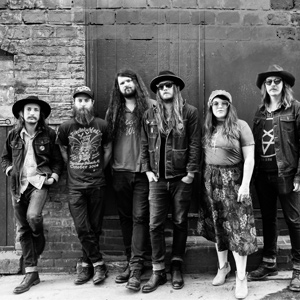 Originally from Birmingham, AL, Banditos is a group – more like a gang, actually – of six 20-somethings, nowadays operating out of Nashville, close to, and simultaneously very far away from, the gleaming towers and industry hustle of Lower Broad and Music Row.

The members of the band first met playing in various punk and rock ‘n’ roll projects around Birmingham at D.I.Y., all-ages venues. In 2010, singer/guitarist Corey Parsons and singer/banjo player Stephen Pierce began busking around town and were soon asked to perform at their favorite local bar. Without a full band they invited friends Randy Wade (drums), Jeffrey Salter (guitar), and Mary Beth Richardson (vocals) to join them.

Salter and Wade studied together at music school learning classical/jazz techniques, while Richardson’s background was mostly singing in church choirs. After some apprehensions from Richardson about taking the stage with an unrehearsed band, a last-minute trip to New Orleans with the group (which resulted in a stolen hotel Bible inscribed with the band’s lyrics) seemed to cure a case of the cold feet. The ensuing performance was raw and electric, and an ecstatic crowd response further cemented the members’ convictions to become a full band. The addition of bassist Danny Vines made the group complete.

The members soon moved into a house together in Birmingham, and after repeated tours through Nashville, decided to move the band there instead, where the music scene was bigger and more diverse. The sextet has since developed their unique and airtight sound, culminated through several years of enduring friendships and a roaddog touring schedule that has, at their count, numbered over 600 shows in three years.