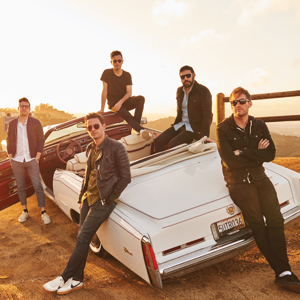 “It’s a weird time to be a rock band right now,” observes Max Kerman, the singer, guitarist, and chief songwriter for the Arkells. “I just feel like rock has gotten so conservative and doesn’t know where to go. To be honest, I don’t really listen to a lot of rock music right now.”

That’s not a radical statement for your average twenty-something in this EDM-dominated era, but it’s a bit surprising coming from a guitar-slinging guy whose band seemingly personifies a certain old-school, ethic. Hailing from the gritty industrial outpost of Hamilton, Ontario, the Arkells have notched four Juno Awards and a gold record on their sweat-rusted belts, proving there’s still a place for passionate, no-bullshit rock ‘n’ soul in the mainstream. (In 2015, they were the most-played band on Canadian alt-rock radio.) But the group’s new album, Morning Report, betrays a more irreverent, adventurous ethos that more readily recalls the cut-and-paste approach of hip-hop beatmakers than the plug-and-play attack of a live rock band, with click-tracked rhythms, subliminal samples, electronic pulses, and sax and violins threaded into the richly textured mix.

Morning Report balances tales of last night’s debauchery with more sobering examinations of a time in life that doesn’t get much play in rock music: your late-twenties. It’s the phase when all your friends start getting married, your parents suddenly decide to get divorced, and long-distance relationships hit their shit-or-get-off-the-pot breaking point. But while melancholic, meditative ballads like “Passenger Seat” and “Come Back Home” provide unflinching portraits of marriages on the brink of collapse, rousing, soul-powered sing-alongs like “A Little Rain” pay poignant tribute to the friendships that help you through the tough times, and provide that much-needed shoulder to cry on.