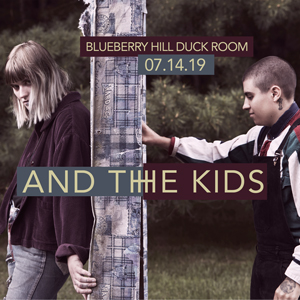 Since their earliest days as a band, And The Kids have embodied the wayward freedom that inspired their name. “When Rebecca and I were teenagers we just lived on the streets and played music, and people in town would always call us kids—not as in children, but as in punks,” says Mohan. On their third full-length When This Life Is Over, the Northampton, Massachusetts-based four-piece embrace that untamable spirit more fully than ever before, dreaming up their most sublimely defiant album yet.

The self-produced follow-up to Friends Share Lovers—a 2016 release acclaimed by NPR, who noted that “Mohan’s striking vocals rival the vibrato and boldness of Siouxsie Sioux…[And The Kids] make music that’s both fearless and entertaining”—When This Life Is Over unfolds in buzzing guitar tones and brightly crashing rhythms, howled melodies and oceanic harmonies. Although And The Kids recorded much of When This Life Is Over at Breakglass Studios in Montreal (mainly to accommodate the fact that Miller was deported to her homeland of Canada in 2014), a number of tracks come directly from bedroom demos created by Lasaponaro and Mohan. “The sound quality on those songs is so shittily good; it’s just us being so raw and so alone in the bedroom, writing without really even thinking we were going to use it,” says Mohan. “We recorded them right away, and there was a really strong feeling of ‘Don’t touch them again.’”

Even in its more heavily produced moments, When This Life Is Over proves entirely untethered to any uptight and airless pop-song structure. Songs often wander into new moods and tempos, shining with a stormy energy that merges perfectly with the band’s musings on depression and friendship and mortality and love. On opening track “No Way Sit Back,” And The Kids bring that dynamic to a sharp-eyed look at the lack of representation of marginalized people in the media. “If you’re not seeing yourself portrayed on TV, whether you’re a person of color or trans or queer, that can be really damaging to your mental health—it can even be fatal,” says Mohan. With its transcendent intensity, “No Way Sit Back” takes one of its key lyrical refrains (“The world was never made for us”) and spins it into something like a glorious mantra. That willful vitality also infuses tracks like “Champagne Ladies,” on which And The Kids match a bouncy melody to their matter-of-fact chorus (“Life is a bastard/Life wants to kill you/Don’t get old”), driving home what Mohan identifies as the main message of the song: “Don’t die before you’re dead.”