The Father of Rock & Roll 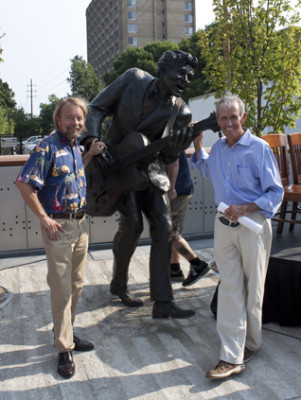 Let it rock! Sculptor Harry Weber’s in-motion sculpture does artistic justice to rock and roll legend Chuck Berry, the first person inducted into the Rock & Roll Hall of Fame and the St. Louis Walk of Fame. It is set in a plaza with trees and moving colored lights that make musical notes. Lyrics to his rock anthems are embedded in the granite stones of the plaza. The statue is located in the Delmar Loop in St. Louis, MO, USA, right across the street from Blueberry Hill!

After snapping your photo with the statue, make your way over to Blueberry Hill to see the extensive Chuck Berry memorabilia collection! It’s on par with any museum! Come see the most influential Rock & Roll guitar in the world, the Gibson-350T with which Chuck Berry wrote, recorded, and performed his great classics such as “Rock & Roll Music,” “Sweet Little Sixteen,” and “Johnny B. Goode.” We have the largest collection of Chuck Berry artifacts and historic memorabilia on display in the world!

KMOX radio show host Charlie Brennan and Blueberry Hill owner Joe Edwards spearheaded the effort to commission the eight-foot bronze statue which recognizes the achievements of the man who spread a musical revolution from the streets of St. Louis to Europe and Asia and beyond. It was dedicated on July 29, 2011. Nationally-recognized artist Harry Weber has also sculpted Lewis and Clark, Bob Gibson, and Doug Flutie among others; he has installed over one hundred large works in twelve different states and the Bahamas. 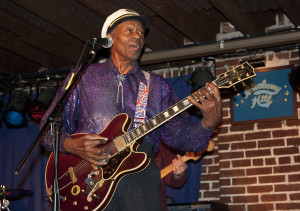 Born in St. Louis on October 18, 1926 and hailed as the “Father of Rock & Roll,” Chuck Berry’s signature guitar work, poetic songwriting, and inspired showmanship have influenced every Rock & Roll musician to follow him. Beginning with “Maybellene” in 1955, he recorded a series of hits that defined the standards of the genre. He was the first person inducted into the Rock & Roll Hall of Fame, and is a member of the Songwriters Hall of Fame. His song “Johnny B. Goode” is on the copper records aboard the Voyager Space Probes, launched into outer space in 1977 to reach out to the universe with the best of our culture. 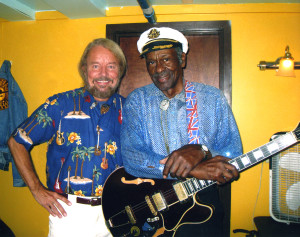 “If you tried to give rock and roll another name, you might call it ‘Chuck Berry.’”

Chuck Berry was the first person inducted into the Rock & Roll Hall of Fame. His inscription reads: “While no individual can be said to have invented rock and roll, Chuck Berry comes the closest…”

Eric Clapton, Brian Wilson and Mick Jagger have acknowledged Berry’s influence on their own work. Rolling Stone Keith Richards said, “… I lifted every lick he (Berry) ever played!”

From a May 2009 story in Rolling Stone: “In the pecking order of rock & roll survivors, Bob Dylan sees himself as number two, behind only Chuck Berry.”

As film director Taylor Hackford asks, “How many geniuses of American culture has St. Louis produced in the 20th century? It’s a handful of truly great people that you look at and say, ‘Oh my God! Our culture is because of these people.’”

“Chuck Berry is the most important figure in Rock & Roll, without a doubt.”